THE GARDEN OF FLAMES (SRB), performans 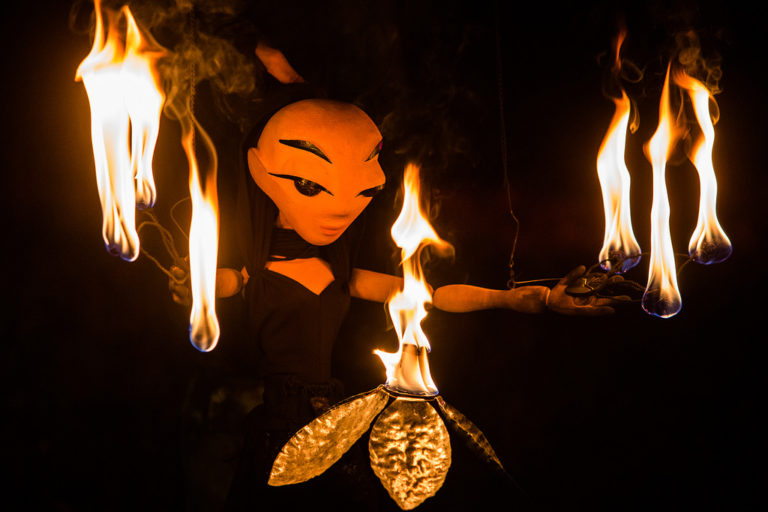 The basic inspiration for this performance lies in transferring the human body mechanics that manipulates on the doll's technology, using the skill of puppet animation and optical illusions.

Filip Jevtić and Jelena Stanojević created Okira, a puppet dancing with a burning ball. After the Okira’s success, the authors decided to make more demanding and complex dolls with the idea of ​​making a four-part puppet performance with two animators, adding a fire-hoop fireball and modifying the fireballs into birds and butterflies.

The name of "Garden of Flames" is taken from the set of full-bodied metal flowers led by a large fire-filled lotus, with which the dolls emerge.

The music is original and compiled for this performance by Filip Jevtić and Antun Gverović.

They performed at the JetLag festival in Amsterdam in 2017.

Filip Jevtić graduated in 2004 from Scenography and Costume Design at Ohio University, USA. Since then he has designed nearly 30 puppet plays for children and adults throughout the region. He has many awards for puppetry and technology. As a musician, he is a member of Cirkusfera Circus Association from Belgrade.

Jelena Stanojević graduated from the Polytechnic School in Belgrade in 2008. as a graphic designer. She is a member of the Inex Theater, a circus troupe from Belgrade, and her specialty is juggling it with fire.

Antun Gverović finished the School of Applied Art in Cetinje 2005. as a graphic designer and has been working in that field since. As a musician, he is part of Cirkusfera Circus Association from Belgrade.

Budimir Marjanović has a PhD in Chemistry at the University of Belgrade in 2012. Currently works as a director of the Centorhem chemical company, Stara Pazova. He is the author of 23 scientific papers in international scientific journals.