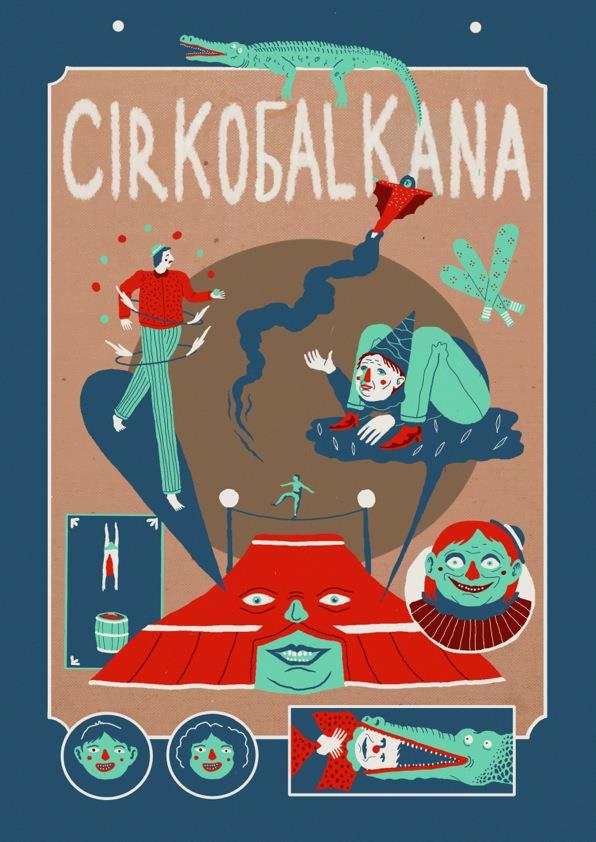 There is a sixth edition of Cirkobalkana - a festival of contemporary circus in a circus tent, an independent space for performance, education and creation. This unique festival in the region was organized by enthusiasts and circus enthusiasts gathered around Circusfera organization from Belgrade and Cirkorama from Zagreb, with the unselfish support of this year's local partners Cirkoneo from Novi Sad.

With the desire for strengthening, development and support of the circus scene in Novi Sad, Cirkobalkana will be presented to the Novi Sad audience for the first time in the period from September 14-22.

Through its rich history, the circus we know today is going through different phases of development, takes on a variety of forms and often changes the place of performance - from the tent as the original circus stage, through cabaret, street, theater, sports hall etc. Regardless of everything, surely, he was called a new, contemporary, classical, traditional or otherwise, the circus is still a circus and as such belongs to the performing arts which the audience admires, with whom it laughs, remains breathless and always is happily returning.

Circus is an art that has its own technique, skill and is presented to the audience in an unlimited number of forms. That's why it's perhaps most right to say that what is currently causing our attention - an non-aligned circus. In a country that can not boast of the rich circus tradition and the country where the word circus is used exclusively in political clips, this may be the best description of the current view of the circus, as well as the fact that only by this view of the circus and its artistic potential can we come to a new audience that needs to get to know him.

With the selection of works of art and the desire to deepen the cooperation and exchange of artistic practices of the local, regional and European circus scene, the festival will present the current diversity of the artist's circus thinking reflected in engagement, experiment, political and public relations.

Thus, during the nine days of the festival, the audience will have the opportunity to see the most diverse circus fusion and hybrids of six performances from France, Italy, Belgium, Croatia, Slovenia and Serbia, four works in progress of young regional artists, Open Stage, three performances for children of local groups as well a rich accompanying program in the form of musical and fire performances, round tables, stands, residences and much more that today we call circus.

Therefore, carefully study the program, select something or everything and under the auspices of a red tent discover the world of the CirkoBalkana Festival.

We started off with the Finnish artist Ilona Jäntti who bases her show on the artistic expression with a prop unfamiliar to her- not insignificant when keeping in mind that the prop is metal wire. This is the artist’s way of going one step further from standard circus props, and at the same time, she herself is exploring a completely new technique of working with the prop, where in lies the proof of her innovation. Also present are one of our regional representatives, the Serbian art group The Garden of flames, who combine techniques of production and manipulation of puppets with the circus element of fire. The iron dolls are manipulated by the artists who wish to convey their circus techniques through the dolls, while accompanied by a strong live music act. While we’re in the region, it would be a shame to skip mentioning the CirkoBalkana Chaos Cabaret as a very memorable form which has been developing for the past ten-or-so years in the region, and it very deftly flirts with traditional circus and contemporary currents as it introduces a unique timeless style- a true Balkan ambience supported by artists from Serbia and Croatia. Compagnia Zenhir, hailing from our next-door neighbor Italy, is made up of members of one of the most influential group of contemporary nomads today – The MagdaClan Circus. This trio uses modern technology and interpersonal relationships as a leitmotiv, all-the-while using difficult circus techniques such as: hand-to-hand acrobatics, acrobatic dance and acrobatic ladder manipulation, all made even better by aerial stunts and a charming dose of original Italian humor. A very interesting and innovative combination is brought to us by the duo of the French company Lazuz. Combining acrobatic dance and juggling – these two artists discover a whole new world of possibilities which, at first glance, seem as obstacles at interpersonal relations of actors on the scene. Their artistic exploration for the show (which was preselected for the CircusNext PlaTFoRM) took two years before it was ready to be presented to the audience and is currently being performed all over Europe. We will also be having a duo of representatives of one of the longest-running circus groups Antuntun. Using clown, juggling and acro-balance techniques, the two artists take up an interesting approach to presenting the circus and all its wonders to children, using a cabaret-collage in the show “Between Extremes”. From the southern part of the Balkan Peninsula – Greece to be precise, come the Dromocosmicas –a travelling theatre which at the core of its expression skillfully combines circus skills (clown, equilibrium, acro-balance) with theatre, slapstick and silent film. Their show “Vagor & Bellavita” was performed in almost every part of the world and has received numerous awards. While we’re on the subject of children’s shows, there are other puppeteers to be introduced:  The Polpet Theatre from the neighboring Slovenia, who focus on the short street-style form of performance, interweaved by different situations and character relations, relying on the classic puppet show with a screen, but using a clearly-defined clown technique when basing character relations. And for the finish, some surrealism, in the form of the Italian group Laden Classe and their“193 Problems”. How and in what way can one make a contemporary circus show? What are the problems one can run into? – are some the questions which are the main focus of this quintet, who managed to count 193 problems arising when creating a show. When performing, they’re using a very intense and unique circus technique, leaving the audience simply breathless.

We’ll also be having work-in-progress evenings where we’ll be introducing some of the most innovative artists who have entered the regional selection for the CircusNext PLaTForm, and among those we’ll be hosting the Slovenian group MismoNismo (WeareNot) which has been preselected from the European selection. They will be performing just as they ship off to Nerpeelt to participate in the final selection of laureates of the platform.

We mustn’t forget the all-day hangouts, open-door practices, workshops for children and adults, music acts performing during the entirety of the festival, as well as the amazing Laboratory of Circus Arts which will bring five different circus workshops for professionals, five innovative approaches to circus techniques and their combinations.

So, peruse this year’s program carefully, pick something or everything, and under the dome of the red tent discover the world of the CirkoBalkana Festival!!!